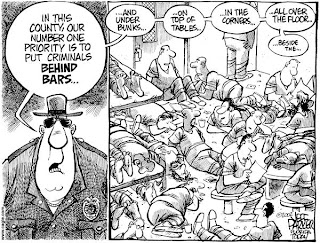 I was turned onto an excellent article (see, here) recently by my fabulous law partner that discussed an old, favorite topic of mine – sentencing reform.  It seems that someone introduced a bill recently (HB 3194 – see it here) that addressed the skyrocketing costs of incarceration and the enormous prison budget in Oregon.

As I have mentioned previously, statistics clearly show that the crime rate has not changed drastically in a very long time.  In the US, it steadily rose after World War II and peaked between the 1970’s and 1990’s.  It has been in a pretty steady decline ever since.  In other words, any recent hype and talk about crime waves, epidemics and the like are just that – talk.  The overall statistics do not support the need for bigger enforcement budgets, tougher sentencing laws, and all of our politicians, legislatures, and cops do not need to “get tough on crime” because no matter what we have done over the last 15 years or so hasn’t made a shred of difference!

What has changed though, is our prison population which, both here in Oregon and nationwide, continues to spiral out of control.  What does that mean?  It means we are constantly having to build and fund bigger prisons for the people we stuff inside them though doing so doesn’t seem to have any affect on the crime rates.  Does this make sense to anyone?

For decades now, Oregon has been no stranger to this trend especially since the passage of the draconian Measure 11 long ago.  AND, Oregon is no stranger to the overall trend that we have and continue to stuff so many people into our prisons, we can no longer sustain the cost of that.  So, someone commissioned a study and found that this is as insane as it sounds.  And by insane, I mean the old Albert Einstein definition of insane.

As a criminal defense attorney, I saw first-hand how the prosecutors can use and abuse this statute to force people who committed essentially lower-level crimes into pleas by just threatening or charging them as Measure 11 crimes adding a hefty mandatory minimum sentence to any conviction.  And, for some ridiculous reason, people sentenced under this statute get no good time credit and no access to any prison programs.    Working as an attorney in both the criminal and civil worlds obviously gives me a unique perspective on this issue and, maybe, I’m too close to the issue to see big picture though I’m brash enough to say, “I doubt it!”

Regardless, we hope, someone and something is going to be done about this if this billed gets passed.  Alas, the law and order types (and politicians who prosper on fear mongering to these people) will fight this bill hard telling everyone that we are all in grave danger if we reform some of our sentencing laws and empty some people from our prison population – or, allow them access to some program that might actually better themselves and make their time in custody of some benefit to them, and indirectly, society in general.  That position is perfectly espoused in this editorial which is the counter-point to the article that inspired this post.  What do you think?